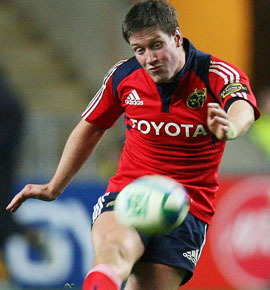 Man-of-the-match O’Gara kicked seven penalties from eight shots in a fascinating duel with his Ireland colleague Jonathan Sexton, who finished with six penalties to his name.

The Thomond Park victory was soured by a worrying ankle injury for Munster captain Paul O’Connell, but it could be hugely significant in securing a home Magners League semi-final for Tony McGahan’s men.

They are 12 points clear of the chasing pack at the top of the table with just three rounds remaining.

Shane Horgan crowned his 200th appearance for Leinster with the only try of a furiously competitive first half.

O’Gara had kicked three penalties for the home side, but Munster produced a sizzling second half display as their tireless forwards took the game to the visitors to allow the fly-half and Paul Warwick to boot them to victory.

O’Connell, such a crucial presence lately for both province and country, forced a penalty at an early breakdown as Leinster looked to build momentum.

Munster were first to get within try-scoring range, the outstanding David Wallace driving toward the line off a five-metre lineout. A solid scrum from the hosts set up a penalty from which O’Gara restored their lead at 6-3.

Sexton increased his influence by striking two left-sided penalties through the posts, nudging Leinster ahead by the midpoint of the half.

And just moments later, Horgan delighted the travelling support by finishing off a training ground move in the right corner. Isaac Boss and Gordon D’Arcy combined off a scrum on halfway and sent Isa Nacewa through a gap, with the full-back’s well-weighted kick gobbled up by the onrushing Horgan.

Sexton drew his conversion attempt across the posts and some hard graft from the home forwards teed up O’Gara for a penalty from distance.

But Munster lost Johne Murphy to the sin-bin for holding on after making a tackle, and Leinster, who carried the bigger threat in broken play, pressed on.

Sexton coolly slotted the resulting penalty from a difficult position on the right and, after a timely turnover from Boss, a good kick and chase from Jamie Heaslip set up a chance for the Leinster fly-half to move the lead out to 11 points.

But 14-man Munster immediately lifted the tempo at the start of the second half, O’Gara sustaining a facial wound as he chased his own chip.

Warwick, O’Gara’s blood replacement, knocked over a penalty and the returning number 10 added another to increase the pressure on the Heineken Cup quarter-finalists.

The loss of captain O’Connell, who fell awkwardly at a lineout, did not deter Munster and O’Gara whittled the gap down to 20-18, with Mike Ross singled out for a scrum infringement.

Munster had the bit between their teeth and Leinster were falling foul of referee Andrew Small’s whistle. Brian O’Driscoll was the second player to see yellow, picked out for a similar breakdown offence to Murphy’s.

O’Gara edged his side ahead with another fine strike, from just inside Leinster’s half but the red tide was halted by Sexton’s 66th-minute penalty after some good work from Nacewa.

Yet all over the pitch, the Munster threats were increasing. Keith Earls probed with a well-judged kick chase, and New Zealanders Sam Tuitupou and Doug Howlett went close on the right.

At 23-21 down, O’Gara pushed a penalty wide to the right after a Munster maul was dragged down illegally, but there was no sense of panic from the hosts.

They were making good use of possession and some fresh legs in the pack kept them going forward.

In a frantic finale, Leinster coughed up a penalty five metres from the try line. It was a tough kick from wide out on the left but O’Gara showed his class once again to snatch the win.

Popular posts from this blog